Simscape Multibody: 6DOF joint has a degenerate mass distribution on its follower side.

Irina-Stefana Bulgaru on 22 May 2021
⋮
Answered: Yifeng Tang on 24 May 2021
Accepted Answer: Yifeng Tang
I have been working on a simulink model for attitude control of a solar sail spacecraft. The top-level model is illustrated below:

The spacecraft orientation is controlled by 4 triangular vanes located at the tips of the solar sail, and these vanes are commanded through a rotation around the corresponding solar sail diagonal. The 4 angles that define the rotation of each vane have been labeled 'control angles' in this model. The control angle is zero when the vane is in the same plane as the solar sail. Visual representation of the mechanical system is below:

The simmechanics implementation of this mechanical system is also represented below: 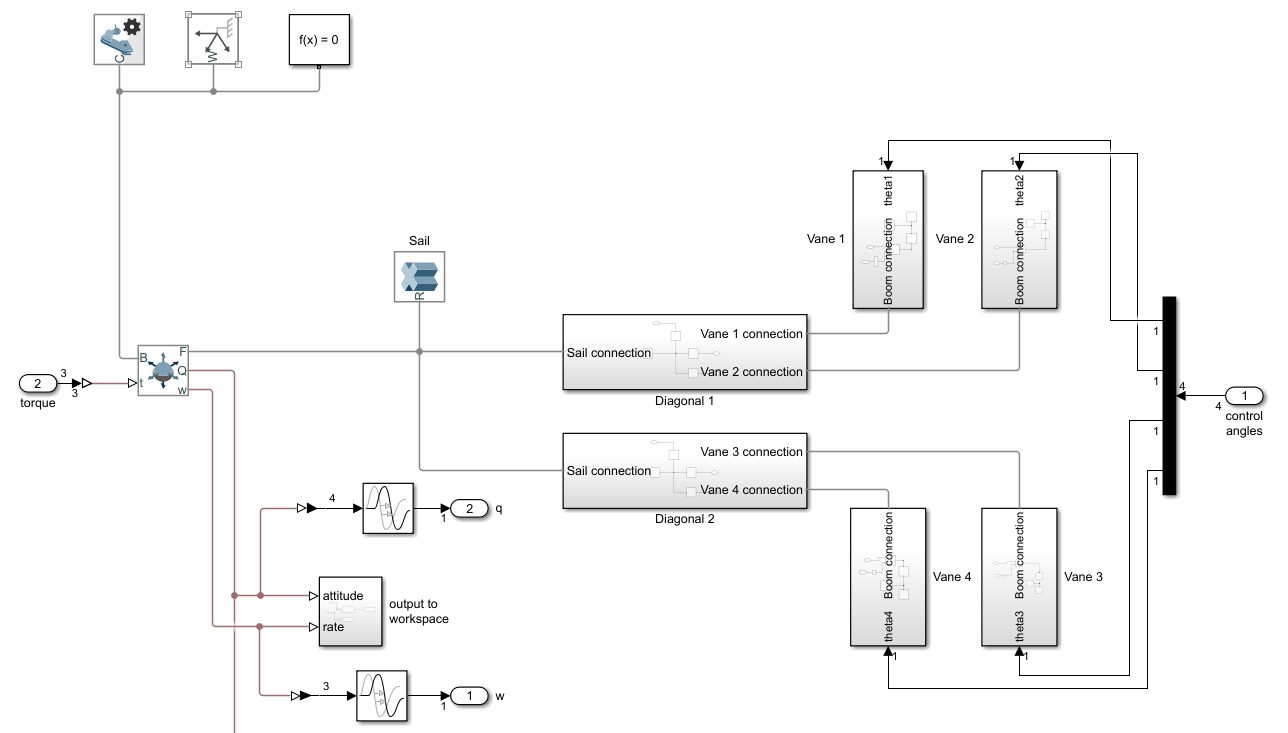 We can observe that the entire system is connected to the world frame via a 6DOF joint, because I want to simulate the free motion of the spacecraft in deep space. We can also observe two inputs to this system:
The outputs included in this screenshot are the sail attitude and rotation rate, with a transport delay to avoid algebraic loops.
The connection between the vane and the sail is modelled by a revolute joint whose input is motion and whose torque is automatically calculated. The vane model and the joint properties are illustrated below: 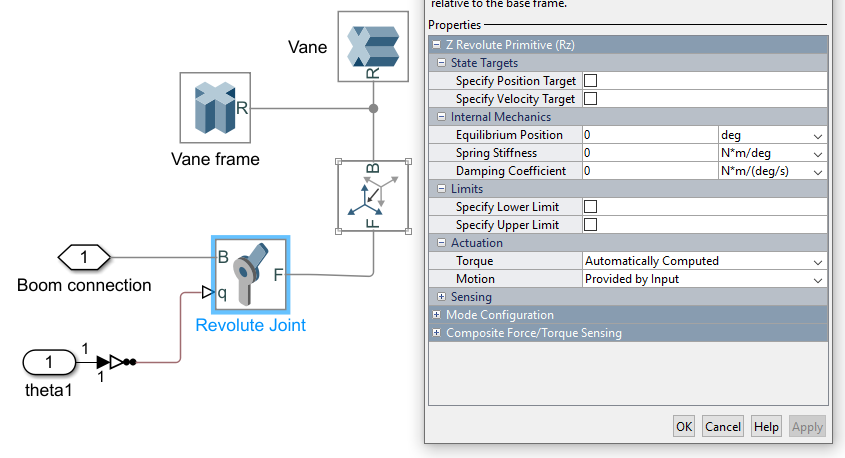 The simulation runs without a problem (which means that there aren't any mismatches in reference frames for the base and follower of any joints in the model) until I try to connect the control angles output of the Actuation Model block (in the top level model) to the control angles input of the Vanes Saicraft Model.
What I have tried:
I have a few years experience with simulink but I have only started working with Simscape Multibody 2 weeks ago. At this point I am not sure if I am missing something in the assembly of the sail, if I am trying to solve a problem that simscape cannot compute, or if I am using the joint actuation incorrectly. The library also provides blocks for torques and forces, but even after reading through the documentation I did not understand the difference between using those and just applying the motion/force/torque as input on the joint. Do you think using any of these force/torque blocks would make a difference?
Any tips and advices are greatly appreciated.
Thanks,
Irina

⋮
Do you have a screenshot from the Diagnosis window? I wonder if it complains about algebraic loop at the very beginning.
And what does it look like inside "diagonal 1 & 2"? Degenerate mass error usually happens when a mass is missing between two joints.

⋮
The screenshot for the diagnosis window is below. You are right, it does complain about the loop, and this is the reason why I added the two delays at the outputs of the 6DOF. The screenshot below is what happens when the delays are removed. With the delays, I only get the "degenerate mass distribution" error, without the algebraic loop warning. 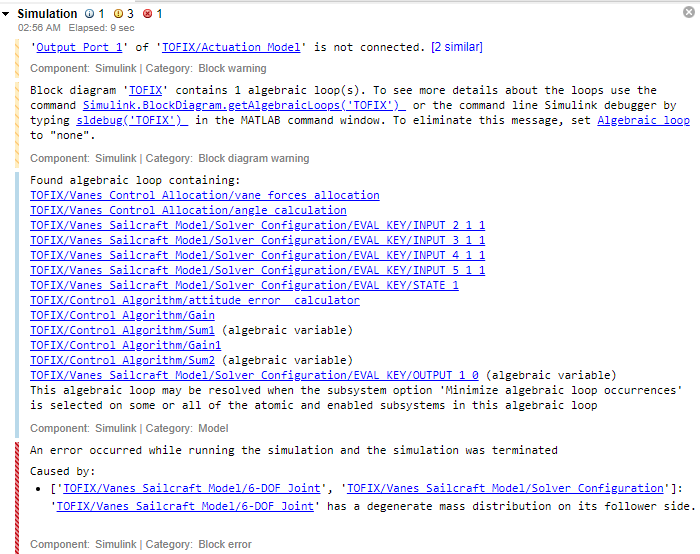 The screenshots for Diagonal 1 and Diagonal 2 are below. As you can see there are no joints in here, so I don't think I have two joints connected in series. There is a diagonal solid between the 6DOF and the Vanes revolute joint. 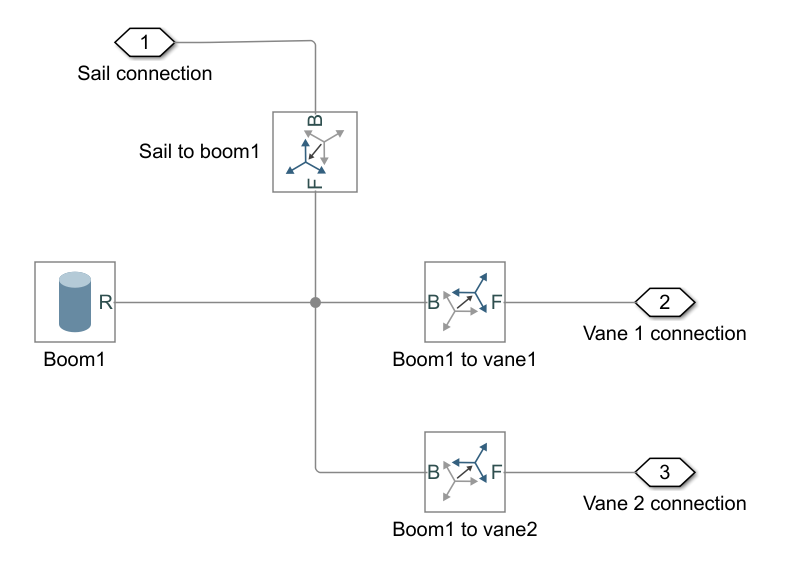 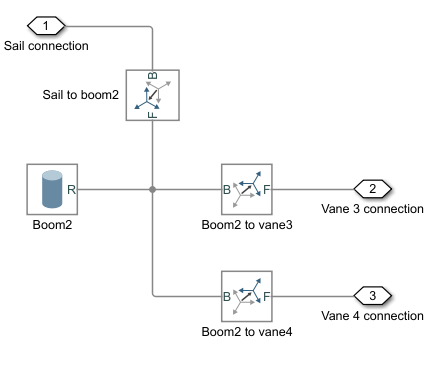 ⋮
I agree. I don't see anything obviously wrong from the screenshots. Are you able to share the model? The geometry looks generic enough. But if the controller is proprietary, you can maybe make it dumber? As long as we can reproduce this error it's OK.

⋮
Sure, the model and initialization script can be found here.
The controller is not a problem, at this moment it still needs tuning, and the allocation needs some work too. Even if the error is resolved, the system will most likely not stabilize yet anyway, it is work in progress.
If you would like to see how the simulation runs without the error, simply break the link between the Control Alocation Block and the Vanes Sailcraft Model and connect the Make Dummy Angles block to the Vanes Sailcraft Model instead.

Yifeng Tang on 24 May 2021
⋮
Thanks for sharing the model. It looks to me the problem here is still the algebraic loop. I tried two ways to break it and both seems to allow the simulation to run without a problem.
1. Use a "First Order Hold" block 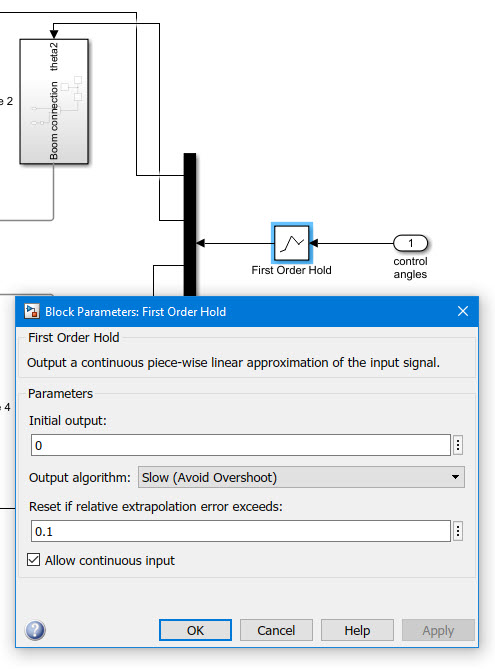 2. Or, use first order transfer functions and a small time constant

You only need one of them. Both can be physically justified as some sensor or actuator delay in the system.
At the same time, I would agree that the "degenerate mass" error wasn't helpful in finding a solution to the problem, as mass was clearly present on the F side of the 6-DOF joint. Looks like the algebraic loop makes the system of equations resemble those of a degenerate case :(