Image Analyst on 10 Dec 2020
⋮
Edited: Image Analyst on 10 Dec 2020
You didn't resize the image or register it. What I'd try first is threshold each image to try to find the circles in each image. Then knowing the centers and diameter, paste (see attached demos) the smaller IR image onto a black canvass that is the same size as the visible light image. Then add the two together or put each into one color channel with imfuse().

⋮
Is it using toolboxes ?
Main aim is to do the job without toolboxes
I am also attaching the files for tips we got 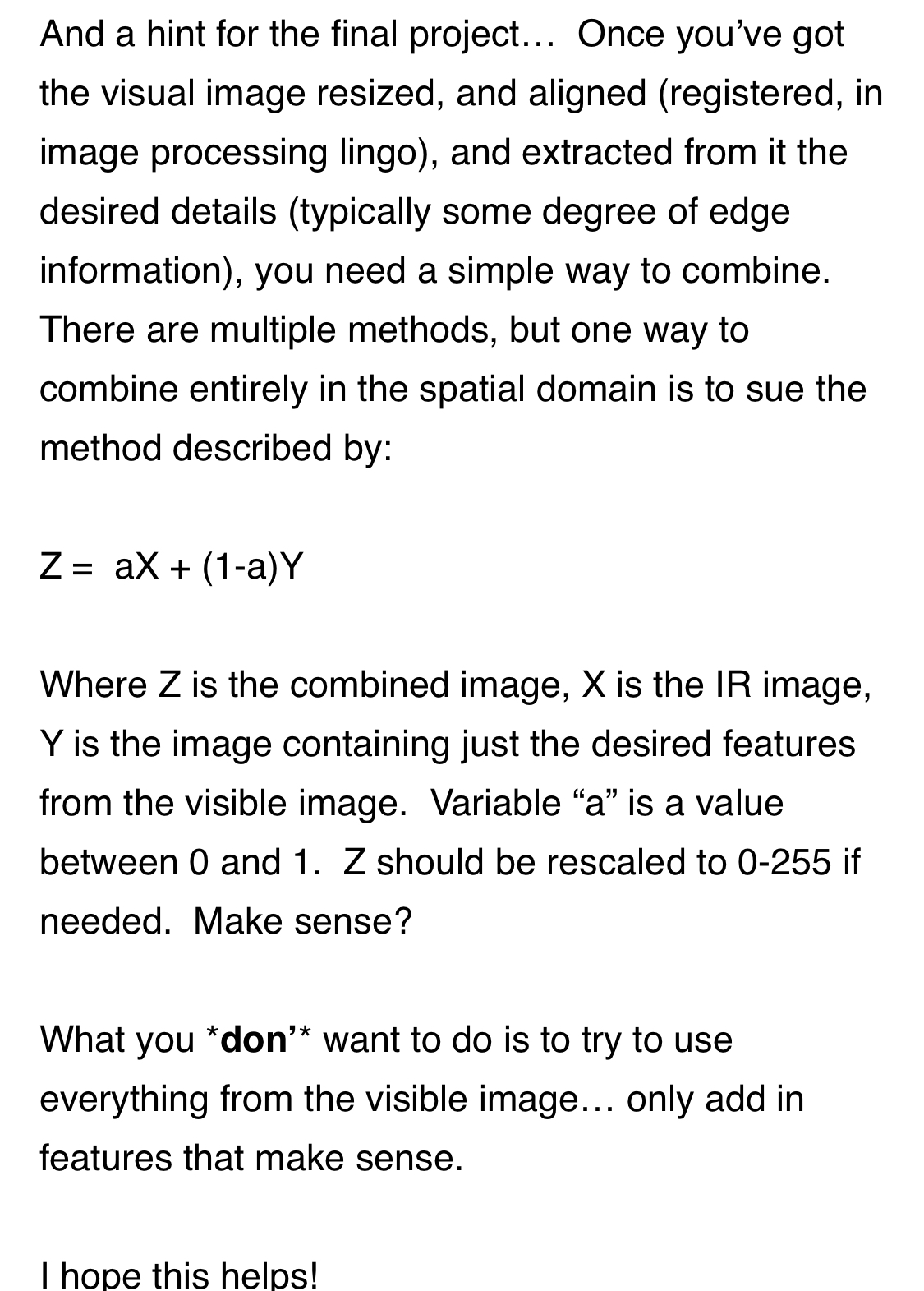 Our main aim is to take some features of visible image and fuse it with IR image to get output image.

⋮
No. The method I'm thinking of involves only using < or > to do thresholding, then find() to find the circle coordinates, and mean() to find the center of the circle. Those don't require any toolboxes, just built-in functions.
mask = irImage < someValue;
[r, c] = find(mask);
xCenter = round(mean(c));
yCenter = round(mean(r));
xIRDiameter = max(c) - min(c);
yIRDiameter = max(r) - min(r);
row1 = round(xCenter - xIRDiameter/2);
col1 = round(xCenter - xIRDiameter/2);
row2 = row1 + yIRDiameter;
col2 = col1 + xIRDiameter;
subImage = irImage(row1:row2, col1:col2)
and so on for the visible light image. Then just paste the IR subimage onto a canvass of all zeros:
bigIR = zeros(size(visibleImage), 'uint8');
but you can't just paste it using the other coordinates, you have to adjust the coordinates to put the center where the center of the clock in the visible light image is. Plus you also have to resize it
subImage = imresize(subImage, [xVisibleDiameter, yVisibleDiameter]);
And when you paste that resized image you have to compute an upper left corner that is the same as the upper left corner for the clock block in the visible light image.
By the way you would not make measurements on an image that is a weighted sum of the IR and visible light image. It just doesn't make sense. I mean they don't even have the same units. The visible light image has units of gray levels while the IR image has units of temperature in degrees Celsius. What you could do is to use the visible light image to identify objects and produce a mask, then go to the IR image to measure the temperature within that mask.

⋮
Yep, my code should do that. Did you try it?