When –by2 slows down growth and makes the equation nonlinear, the solution approaches a steady state y(∞) = a/b.

OK? Now, finally, a nonlinear equation. Growth, but it's-- the growth is cut off by competition-- slowed down my competition.

Let me show you the equation. In a way, it's the simplest nonlinear equation I could think of. We have the usual dy/dt equal ay. That would give exponential growth. The growth would go on forever. But then, as y gets large-- if we think of y as the population, so the growth is exponential when the birth rates higher than the death rate, and we grow. We have-- and that's what's happening.

But our world population is not growing pure exponentially, forever. And this is a simple term, a simple model not, very accurate, but it's the right place to start. For competition, when you have too many people, somehow the multiplying y times y gives you a number of interactions of all the y people with themselves. And those interactions-- that competition slows down the growth, and so the coefficient there is negative.

We want to solve that non-linear equation and learn from it. And it's called the logistic equation. That's-- it's got to be a famous example. And it has a neat trick that allows you to solve it easily.

Let me show you that trick. The trick is to let z-- bring in a new z as 1/y. Then, if I write the equation for z, it will turn out to be linear. So you see, I'm always hoping, and here succeeding, to get back to a simple linear equation. And this device happens to work for this problem.

We need, in the end, a more systematic way that would work for other problems, like there could be some constant term there from harvesting, from the changing the equation. Let me go with this one.

And what do I have? I've got a, with a minus, ay over y squared. That will be z. So that's minus az. Minus minus giving me a plus b. y squared over y squared is just a constant.

And they'll be more there. It will show up in z. And then when I do 1/z to get back to y, that exponential is going into the denominator. That's what's new. That's what's new. Let me get the whole thing correct. I have a a. Otherwise, these are constants d here and b goes there. And I just have to tell you what the d is there.

d is going to involve the initial value, y of 0. At time 0, we start somewhere, y of 0. And we'll begin to grow. We'll grow. But with the slowing down term keeping us back. And, in the end, it can't grow forever because that term becomes bigger than that one.

If y went on and on increasing, then it can't happen. So it really is-- it can only increase while this is positive, and that's only positive below that line. Here's what the curve does. It goes upward, but then it has to-- it can't cross that line because above that line, for big Y-- above that line for big Y this negative term means that the slope is negative.

If I started with a big number, I'd have to come down. But can I just draw that picture? But it's really between here-- between these lines that I'm thinking the world population is. So it started way back at some time minus infinity. And it-- whatever. It came up to time 0. This is t equals 0, starting population. And, of course, t equals 0 could be the year 2000.

We can move the time axis as we want. So t equals 0 might be the year 2000. Our population is still increasing, but it won't go on forever. And it will slow down and approach this limit a/b-- approaches a/b.

So that number a/b is totally special for this equation. And let me think about that part. And we give a name to this curve. It's often called a logistic curve. That's OK. But I like the name S curve. It's an S curve. In some way-- or a Sigmoidal curve. In some way, it looks a bit like an S, a very stretched out S. So that-- and you see why-- do you-- just takes like-- look here.

Those two possibilities , y equals 0 and y equal a/b, are the key things to see for this equation. So I'm going to take a few minutes to see where do those come in. Those are steady states. Let me use that word and show you what I mean.

Steady states, critical points, for my equation dy/dt. Let me write the logistic equation again. A steady state is a value of y where the derivative is 0. Nothing happens. It just sits there. So if that is 0-- so a steady state-- let me use those capital Y for a steady state. Those are just numbers. They are the numbers where this is 0, ay minus by squared is 0.

You see that if I start out at y, at capital Y, a steady state, that is 0. The derivative is 0. I stay there. And there are two possibilities. If I start-- this gives me two possibilities, right? What are the solutions to this equation?

This gives me y equals 0 is one solution clearly. Or y equals-- let's see. If this equals that, I could cancel a y. y would be a/b, exactly the two in the picture. If I start at 0, I stay at 0. No population. Nothing can happen. But if I move a little away, if I get two people, we grow. We grow exponentially for awhile, but then the by squared term takes it-- gets in there, slows us down.

Otherwise, whenever we have S curves, then they don't cross. Depending where we're-- depending on the initial value, we'll get beyond one or other of these curves. And they all go up to that carrying capacity, that limiting population, a/b.

I'll do the example. This will be one example of a general problem. dy/dt is some function of y. It's a right-hand side that depends on y. That will be our next video, to understand those equations dy/dt is f of y and notice that they're not linear. 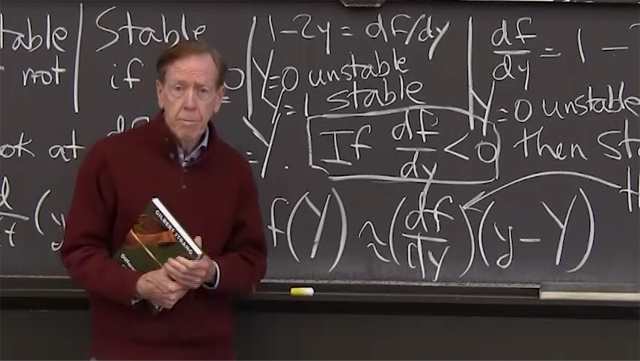